is my collection of strange tales where imagination dispenses with logic; the ghosts of gipsies haunt the remnants of humanity after an earthly catastrophe, women gain the characteristics of other creatures, men resort to desperate measures and a dance of illusions ensues.  Enjoy.

Enjoy my latest story for children –

The Muffkins – Willie, Millie and their parents are a family of toys, weary of being badly treated by Big Bunty. In this story – they hear Bunty’s mother tell her a tale about magic fernseed that can cause invisibility.

When the Muffkins are washed downstream in a flood after heavy rain, Willie suggests they find this magic fernseed so they may be invisible and no longer tormented by children. To cast the spell it has to be Midsummer and they need a pewter plate and a forked hazel branch.

After Willie’s adventure in a kitchen with a hungry cat, the items are found and the spell cast, so the Muffkins are invisible and able to live happily at last among the mystified villagers.

What would you do if a genie suddenly appeared in your back garden declaring he could make your dreams come true?

In my new children’s book  “The Jinni of Dreams”, published with Smashwords, Lissie and Brin are feeding Randy, Brin’s rabbit, when the jinni appears. He claims he can grant what they want if they carry out some tricky tasks. They agree to try.

There is Trog, the giant toad, wreaking havoc, to tackle Drusilla, a daunting sorceress, to be exterminated and Harry the horseman’s head, to restore.

The children move through strange lands and on the way meet Dilly Nilly – a little girl turned by Drusilla into a  whimsical creature of the hills. But all ends well, thanks to the jinni, who is amazed at the pettiness of people’s dreams.

Donkeys defined Santorini when I visited. In my book “On the Island of Fire” – four fantasies for children set on Santorini published with Smashwords – Alizides, a donkey, appears in the first tale “The White Wings”. He dreams he is Pegasus who helped Bellerophon defeat the formidable Chimaera and for some magical moments he is transformed from beast of burden to hero.

I have visited the volcano several times – its eruption in around 1600BC – was catastrophic and it  remains capable of devastation. In the second story “The Earthquake”, a boy, wandering on the volcano, meets Typhon, the tangled monster causing chaos inside the crater.

The sea. where fishermen venture in gale force winds, breaks on black sand and it is easy to imagine momentous events beneath the waves.  In “Falling Stars”two children stumble upon Atlas, resting from his task of supporting the world, and one wonders what fishermen might have encountered on their precarious forays after fish.

The final tale recalls harpies – those mythical creatures, part bird, part woman. In “The Harpies Move Home” a group takes off for a fresh location, rattling holidaymakers on Santorini en route. I hope you enjoy these tall stories and if you have not already been to the island, venture there – to be instantly seduced – without delay!

If you would like to read or download this book, please click on the cover image above: this will take you to Smashwords download page. Here, by scrolling down, you can also view my other works.

RARE PORTRAYALS OF PEOPLE AND PLACE

Marie Quirke-Smith has a mischevious sense of humour and rapid response to atmosphere and character.

As a writer this leads her into explorations of society, a potent sense of place and an incisive insight into people. Her book A PLACE IN THE CHOIR has been published as a paperback and is now on Amazon Kindle. It traces the life of Ellie and her Catholic upbringing, spicing her expriences with humour and trenchant domestic detail.

Marie, who comes from Ireland and now lives in Crete, explains, ” The idea for this book developed when issues arose about scandals within religious institutions. I wondered why this happened. How were the entrants to religious life chosen and how were they trained?

“I write about nuns in particular but I must emphasise that the nuns who educated me in boarding school bear no resemblance to a couple of unpleasant characters in my book. My teachers were dedicated holy women, highly educated, caring and forward-looking.

“The novel is to some extent semi-autobiographical – it’s difficult to write without shadows from one’s own life intruding. But the book is essentially fiction and whatever may ring true to life within the pages is purely coincidental.”

What are Marie’s current views on Catholic education? She says,” I think Catholic educaion continues to have much to offer even though the church itself is on a learning curve and its influence has waned. Education is an ongoing process and any eductiona institution needs to re-evaluate its role from time to time. Each has its own ethos which will influence how people interact and affect the way they live.

“I had an idea in my mind at the beginning of the book but the story took on a life of its own as I wrote. Since the paperback edition was published I undertook a acomplete revision of the novel. Now I feel I have a  more authentic offering.

“I began to write the book in Ireland. When we moved toCrete I didn’t have time to continue on a regular basis.”

But it was finished and she is now writing a sequel. “This has suddenly taken off,” she admits, “The main character faces huge challenges which will have to be tackled. It’s an interesting story based in Ireland and Israel in the 1970s and 1980s.”

She shares a common dilemma with many writers: “I want to write when Ican’t. Sometimes when I’m having a meal with friends I want to be at home writing. Often I’m not mentally present because I’m coming up with ideas which I go crazy trying to recall later.

“I have a problem too – that all the odd jobs must be completed and the house tidy before I sit down to write. So I’m often tired by the time I sit down, then it’s time for a cup of tea – even lunch – any excuse to put off the inevitable.

“But the urge to write is relentless and a day doesn’t go by without writing a few sentences. It’s often some  scene which ignites me – like watching the simple contentment of a man quietly drinking, then joined by friends in a cafe.”

Now she is writing a novel about Crete. She says,” Crete is an influence beyond price. The slow pace of life, the hospitality of the people, the freedom to have the life you desire, the beauty of the mountains, the tranquillity and sometimes power of the sea. Sheep bells and birds song in the early morning. The sound of olive trees rustling in the wind. The valleys, villages hanging onto rocks, wild flowers, sandy beaches and sun umbrellas. The ever changing colour of the sky, those little churches on the hillside, the friendships formed, care for the elderly, love for the children, lights on the night ferry leaving for the mainland, old cities with their harbours, forts and fishing vessels. Village festivals in August – food,wine and raki. And the value of family ties; weddings, baptisms and name days.”

She has come a long way from her first writing as a child when she was given a pencil of her own and wrote about the animals on the farm where she lived. She has responded to social situations, delved the motives of those involved, vividly absorbed a sense of place and infused her characters with convincing traits and intriguing behaviour.

It is these qualities born of a natural talent that will render her books timeless.

I hope you are enjoying the adventures of Fifi and the Swiftifoots, especially the extraordinary pictures by Diana Munz. I have been talking to Diana about her work and she has given me fascinating insights into how she creates. She says, “Drawing has always been  a central part of my life. I don’t remember my first pictures but I remember the first years in playschool where I drew cats, trees and birds. Our playschool was an inspiration, the teachers showing us different tehniques and encouraging us to create. At home my dad often drew pictures with me and my brothers.

“I seek inspiration everywhere. I’m not influenced by any artist in particular but the pictures of Swedish artists John Bauer and Elsa Beskow appeared in many of the books I read as a child and they still fascinate me. “I have a picture in my mind before I start but smaller details emerge as I draw.”She generally uses black pigment liners with different thicknesses and thick sketch paper.

Diana is self taught and would some day like to have formal training.  But would this impede her imaginative flow?

“I have tons of ideas – both for photo art and black and white drawings. I’m planning some black and white still  life studies with food and other arrangements.” She is drawn to inspired commercial photography and the more creative imagery of glossy magazines.  But it is her imaginative transformations that reveal a rare and intriguing talent.

JUST A SHORT INTRODUCTION: I AM LINDA TALBOT AND I WRITE FANTASY FOR ADULTS AND CHILDREN. FOR FURTHER INFORMATION, PLEASE CLICK THE “About Me” LINK BELOW 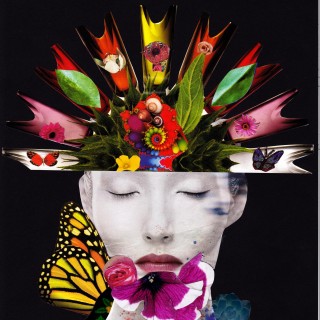 TO READ EXTRACTS FROM Gift of Green Fire COLLECTION OF MY STORIES, PLEASE CLICK ANY OF THE LINKS BELOW. ALTERNATIVELY, FOLLOW THE TITLE LINKS IN THE HOME POST

THE SUN STEPS OF SHUNAI

Thank you for your interest!

Linda Talbot
Create a free website or blog at WordPress.com.